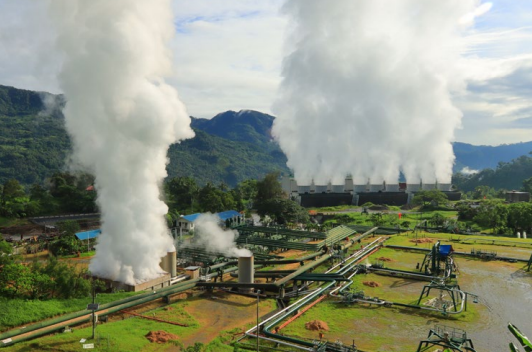 Leading the path of decarbonization, EDC, through its BacMan Geothermal Inc. subsidiary, kicked off its PHP 7 billion PBPP project. This expansion will increase EDC’s existing 130 MW geothermal energy generation capacity to 159 MW. The same low-carbon project was implemented by Japan, helping it achieve its own carbon reduction goals. With renewable energy, the Philippines can reduce its carbon emissions by 72,200 tonnes per year.
The PBPP will use the waste heat from the 110MW BacMan-1 geothermal power plant to generate additional energy without the need for further drilling. The heat from brine, which is usually produced from the wet steam operations, will be used to generate electricity by the new power plant before re-injecting back to the reservoir.
In addition, the new binary power plant is also critical not just in decarbonization but more so in helping build regenerative communities. The project strengthens EDC’s initiatives in empowering its host communities through local job employment, skills development, and livelihood opportunities.
EDC with Keitech Foundation, Technical Education and Skills Development Authority (TESDA), the local governments of Sorsogon and Legazpi, along with the PBPP’s construction contractor, First Balfour Inc., signed a memorandum on the skills development and values formation training of 120 qualified youth from the host communities of BacMan. The program provides on-the-job training for the students, who will be absorbed for employment in the company after graduation.
The safety of EDC’s employees and contractors also remains a priority, evidenced by no injuries or accidents reported from the 300 workers on-site since the PBPP project was rolled out in November 2020.
In a statement, EDC President Richard Tantoco underscored the importance of safety in EDC’s culture and its crucial role in helping provide clean, stable, renewable energy amid the pandemic, particularly in critical industries. He also reminded the employees and contractors that they are all safety leaders who have to return to their families and friends.
EDC has an existing Occupational Health and Safety policy strictly enforced and observed in all of its sites, along with the health protocols for the ongoing pandemic.
Back to Our Manufactured Capital