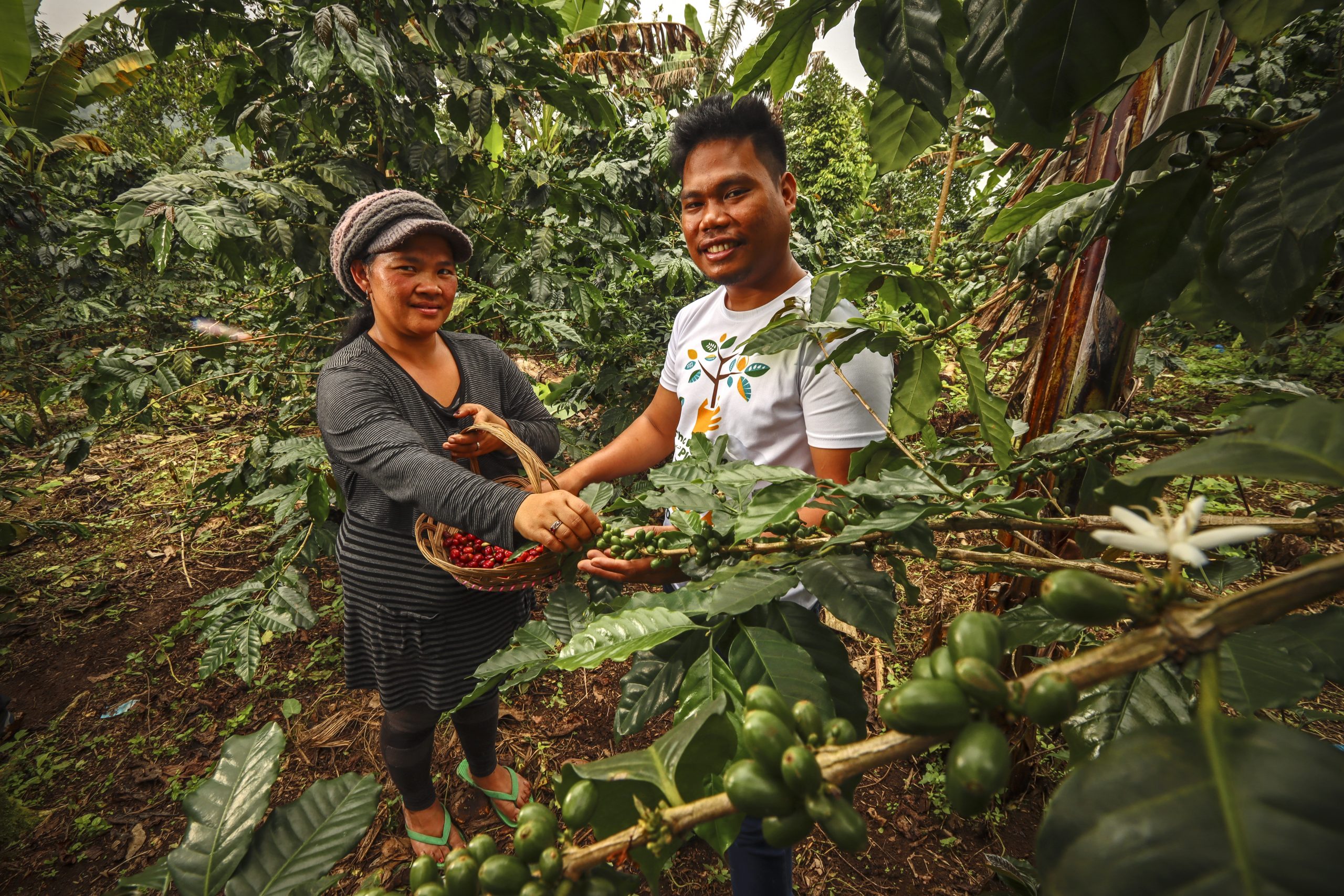 It is also important for us to deliberately choose our partners in our supply chain, as this is in line with our priority for Shared Economic Value. Our partners include local vendors and cooperatives, which help contribute to the local economy

EDC exclusively worked with legal contractors who comply with labor laws and have no labor or human rights cases filed against them. Our contract terms and conditions stipulate that the independent contractor must strictly abide by all applicable labor, employment, and contracting laws.

Creating self-sustaining communities with social enterprise development
As EDC advances its mission of a decarbonized and regenerative future, it remains committed to elevating the lives within its host communities. In 2021, EDC supported four long-term social enterprise projects and 15 short-term livelihood programs that benefited over 2,000 households. For the year, the total value generated by EDC from its social enterprise initiatives amounted to PHP 20.6 million.

One of these initiatives is the Tongonan Farmer’s Association (TOFA) in Leyte, which champions cacao and coffee farming. This was implemented in partnership with the DENR Region VIII and the local government. For the Coffee & Cacao Project, EDC signed a Memorandum of Understanding with the Department of Science and Technology Region VIII, the City Government of Ormoc, and the Tongonan Farmers’ Association on June 30.

The Sukkudaan Coffee Project, in partnership with Mt. Apo Coffee for Peace Inc. also known as the PeaceBuilders Community, successfully raised PHP 280,000 in net revenue in 2021, benefitting 31 IP households in Cotabato. The project is a fourphased coffee enterprise initiative that equips Obo-Manobo coffee farmers. Harvest yield and revenues are projected to increase in the years to come as the coffee plantation matures and more IP farmers participate in the project.

Additionally, EDC and the Forest Foundation Philippines is supporting the Alliance of BacMan Farmers Association Incorporated Agriculture Cooperative (ALBAFAI) to implement the Manito Mangrove Conservation and Ecotourism ProjectPhase I. Once fully-operationalized, this will be a community-managed ecotourism enterprise within a 190-hectare mangrove forest in Manito, Albay, encompassing Barangays Cawit, It-ba, Buyo, and Manumbalay. The mangrove ecotourism site is projected to provide cash for ALBAFAI’s 318 member-households as well as providing employment through tour guiding, food services, and other ecotourism operations once it is open. At the same time, it will encourage the community to continue protecting the forest, as mangrove conservation is directly related to the ecotourism site’s attractiveness and business model. ALBAFAI’s forest protection activities will prevent critical threats such as timber poaching and charcoal production, which were previously caused by a lack of other livelihood options in the community. Last year, EDC helped ALBAFAI establish finance manuals and templates to improve its financial management system, which will be critical as the group grows and pursues ecotourism and other livelihood programs.

The Handicraft Scaling-Up Project in Brgy. BaliliCambucad-Tubigon-Malabo Farmers Association (BALCAMTUMA) is another social enterprise currently being sponsored. Cacao production for Mt. Talinis Dark Chocolate was conducted with the Mt. Talinis Cacao Farmers Association, also in Negros Oriental; and Kamias Prunes production was implemented with local community organizations in Burgos, Ilocos Norte. In 2021, these projects will be in the conceptualization and design enhancement stages. The EDC plans to implement these projects with the nominated community partners in 2022.

Aside from these long-term social enterprises, EDC continued to work closely with community organizations to implement the 15 short-term livelihood projects that were launched in 2020. These include initiatives on cut flowers, backyard vegetables, tilapia raising, community-based piggery, livestock dissemination, coffee seedlings collection, consumer store, catering, and food services. The fast mobilization of these projects ensured income generation and food security for the communities. In 2021, nine of these projects were completed and fully turned-over to the local communities.

Switching on the first Off-Grid e-Community in PH
Bringing together our heritage, expertise, and passion for elevating the lives of our stakeholders, EDC switched on the first renewable energypowered off-grid community in the Philippines. A total of 10,000 households in Barangay Puhagan in Valencia, Negros Oriental were provided free wireless internet via a community-based WiFi. This initiative was instrumental in supporting students in their distance learning education.

This initiative was made possible through the collective effort of EDC, the Department of Information and Communications Technology (DICT), Negros Oriental Chamber of Commerce & Industry (NOCCI), the Municipal Government of Valencia, and the barangay local government.

This pilot project will soon be duplicated in EDC’s other partner barangays, Caidiocan and Malaunay, to establish similar e-communities.

Partners for Progress: Typhoon Odette Disaster Response
EDC reached out to communities and families of employees affected by Typhoon Odette, a Category 5-equivalent super typhoon that devastated parts of Visayas and Mindanao in December 2021. In partnership with five private organizations/groups, 250 sacks of rice were supplied to EDC’s five host barangays in Negros Oriental and Negros Occidental to support 1,537 people, while 150 bags of rice were donated to EDC’s partner communities in Leyte.

Prior to the typhoon’s landfall in Negros Oriental, EDC donated raincoats to the Municipality of Valencia’s Barangay Health Emergency Team and Community-based Task Force, which assisted in the preparation, site inspection, and warning of locals about Typhoon Odette’s impact. The host barangays were also provided SMS reminders to prepare for the typhoon and mobilize the Barangay Emergency Response Team (BERT). In Leyte, EDC’s existing relationship with IBM’s The Weather Company (TWC) for the sharing of weather forecast data aided Ormoc City’s Disaster Preparedness Team in warning residents and businesses about the storm’s potential impact and allowing them to better prepare for it.

EDC lent boom trucks to Negros Oriental Electric II Cooperative, Inc. (NORECO II) so that they could quickly restore electricity lines in Tanjay and adjacent places. EDC also lent four boom trucks and deployed seven teams of trained linemen and groundsmen dubbed Warriors of Light Task Force Kapatid to assist in the repair of power lines to expedite the restoration of power in the service areas of Negros Oriental Electric I Cooperative, Inc. (NORECO I) from Bais City to Canlaon City.

Beyond its host communities, EDC assisted in the impact assessment for Siargao; donated supplies such as rice, water, relief packs, and and solarpowered battery packs to affected employees and households in Cebu; and, with the help of FGen Solar, sent 60 units of solar powered lamps and flash lights to affected communities in Puerto Princesa, Palawan. EDC launched Operation Big Eyes in Bohol and provided PHP 21.8 million in aid. Food and groceries, assorted clothing, and blankets were sent by EDC in 20-footer container vans. 180 solar-powered lights and lamps,, 350 solar cubes, and 40 1kw and 5.5kw generator sets were also included in the shipment.

EDC employees also participated in a donation drive, raising PHP 502,640 for towns and coworkers devastated by the typhoon. In addition, the Company worked with ABS-CBN Sagip Kapamilya to coordinate in-kind donations from workers and partners.
Back to Our Social and Relationship Capital