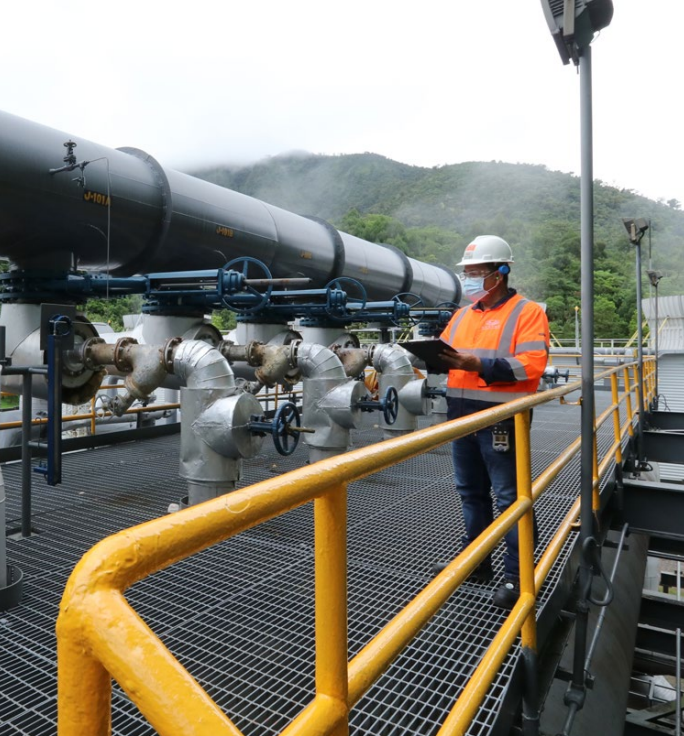 As part of EDC’s initiatives in Geosciences Studies  and Researches for Exploration and Resource  Management, Program Intensity was created to  provide information on well targets with potential  permeability while providing geohazard insights,  particularly on earthquakes. Two (2) projects exist  under Program Intensity – Permanent Seismic  Stations Project (PESST) and Ground Deformation  Monitoring Project (GDEM). Through this program,  EDC harnessed its expertise in seismic monitoring  and tomography, as well as ground deformation  monitoring, and applied it to the geothermal sites.
The Permanent Seismic Stations (PESST) Project  constructed and installed permanent seismic  stations in all EDC geothermal sites. These stations  are equipped with Worldwide Interoperability  for Microwave Access (WiMAX) systems that  enable remote data accessibility and almost realtime data processing. The project allows EDC to  monitor seismicity, identify earthquake generating  structures and assess influence of resource utilization  to seismicity. With its continuous recording  capability and remote data access, the project  has the capability to send out automated alert  messages to stakeholders thru an established alert  system protocol within a short period of time after  earthquake occurrence. Images of the subsurface  are also generated via seismic tomography (e.g.  velocity, attenuation and other elastic parameters)  from the data collected by the permanent stations  to identify areas of interest for future development.
The insights obtained from PESST Project also  provide EDC with information necessary in resource  management strategies and recommendations on  well targets with higher permeability. PESST Project  also helps the organization establish seismically  active areas and create seismic monitoring reports.
Another initiative under Program Intensity is  Ground Deformation Monitoring (GDEM) Project  that primarily aims to determine and evaluate the  general ground movements and their behavior  affecting EDC’s critical facilities. Data loggers and  receivers working on Global Navigation Satellite  System (GNSS) were installed fleetwide, focusing  on pre-identified high-value assets such as power  plants, pads, and administration buildings. The  project intends to collect positional data recorded  and submitted by various satellites and process  them near-real time, providing ground movements  information frequently at specific time intervals.  Additionally, the direction of the movements in  which the facilities are moving towards are also  determined which gives more information on how  major faults in the production fields are potentially  behaving.
GDEM Project stations have been installed back  in 2020 and will be collecting data until 2024  for evaluation. All data are transmitted online and  are accessible for remote monitoring by end-users.  Data processing and interpretation involve statistical  analyses for time-series data, generating visual  graphs for easier assessment. An alert system will  also be established for the project after obtaining  the baseline average movement in the sites.
Correlation between the projects under Program  Intensity triggered by the alert systems will enable a  scientific input in conducting mitigations and safety  measures. All findings will be correlated with other  geohazard initiatives in order to strengthen the  interpretations.
Back to Our Intellectual Capital